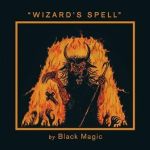 Heavy Metal was meant to be evil in the beginning. Heavy Metal was something that made many people freak out and not missing their weekly Sunday church services and reading the holy Bible the way like it could save them from the wrath of Satan… Oh well, this Norwegian duo better known as BLACK MAGIC (the band logo reeks heavily of the same style as SLAYER’s) has put together a record that brings together evilness, occultism, darkness and all kinds of satanic symbols of old school Heavy Metal music, on their 9-track debut album, "Wizard’s Spell". Call this blackened Heavy Metal or whatever, but I think that’s a darn fitting description ’bout BLACK MAGIC’s stuff here. They have undoubtedly done their very best to embrace evilness in the 80s Heavy Metal. In fact, they seem to love and respect some of their influences so much that they have even shamelessly ‘borrowed’ some very familiar bits and pieces out from some very known Metal albums of the 80s period of Metal – right into their own stuff, showing some ‘good-bad taste’ while doing that. Early SLAYER, early MERCYFUL FATE, early MAIDEN, early SABBATH, early HELLHAMMER and what else they could possibly love? Well, you should find out that by yourself because "Wizard’s Spell’ is simply full of strong musical hints. You must be totally deaf if you don’t hear which bands get connected just within seconds to BLACK MAGIC’s stuff. The influences are all there, clearly on offer and visible in an audio form, so there’s no chance that you cannot miss them. Nonetheless, what a fuckin’ cool album this is – really managing to surprise me from start to finish! Some more chillingly well-done Norwegian black magic can be found at: www.facebook.com/blackmagicnorway, label: www.hrrecords.de