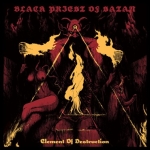 Hailing from the Rhineland of Germany the outfit known as BLACK PRIEST OF SATAN issue out their debut slab of doomy Black Metal. Formed in 2007 the band consists of 2 members; Molestor Kadotus and Avenger. My first instinct is they might have scored the band name from THE BLACK’s album (if you don’t know who THE BLACK are, then youtube them and check out). Debut albums can be a real hit or miss type of situation, especially if I haven’t heard the band’s demo work or pre-debut work. So let’s dive into "Element Of Destruction" and see what this band is about. As I mentioned before this band plays a doomy style of Black Metal full with chant-like clean vocals mixed with typical Black Metal screeching. The production is pretty decent on this album with a good drum and guitar sound. The songs themselves are all in the same vein with a mixture of doomy riffs, slow guitars, and slow beat drums. ‘Ritual Of The Three Candles’ is the longest jam on this album tracking at just over 11 minutes. The song has its good points but overall it just dragged on too long for my taste. ‘Guided By Two Moons’ and the title track stuck with me the most. The riffs on those two songs kept my interest. This whole album could easily be considered a soundtrack for a ritual since there is a lot of dual vocals that resemble a chant. The main complaint I have with the song structures are that the guitars are too distorted. Don’t get me wrong, distorted guitars are great but some of these riffs and the amount of distortion on this album don’t do it much credit. ‘Profit Of Fire’ is a solid song, tempo changes, and interesting guitar hooks. While I do like some Doom / Funeral Doom / Black Metal bands, this was album was just not my style. Considering this is their debut the band does have room to grow and while it may not be in my top 20, it’s an ok first effort by the band. Hopefully they can shorten the songs a bit and focus on a bit more songwriting. For more info: www.last.fm/music/black+priest+of+satan, www.facebook.com/deathstrikerecords