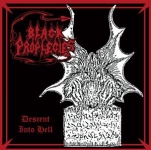 Italian extreme sounding underground Metal heroes BLACK PROPHECIES never got a proper studio album out before vanishing completely away from the map of underground extreme Metal. Some independent sources tell that BLACK PROPHECIES’ debut album titled "Abominations From The Abyss" was supposed to be released on Wild Rags in 1989, but it never happened (doesn’t really surprise me one damn bit; the downhill of the label had already started…). Now, after 23 years since these Italian extreme Metallers called it quits, some of the band’s past works have been collected on one CD, containing of BLACK PROPHECIES two demos (1988 demo "Azathoth" and 1991 demo "Turning The Crosses Towards Hell") and many songs taken from the band’s 4 separate rehearsal sessions, all of them being recorded in 1989. The quality of all of these recordings is unfortunately pretty muddy but then again, none of these recordings have been recorded by using a real studio. They are all rehearsal recordings, so bear that in mind when giving this disc a listen. Musically BLACK PROPHECIES sounded raw and morbid, pretty much the same way as HELLHAMMER did. These Italian lads’ mostly kinda slow-paced, grind-ish and rough extreme Metal obviously had some so-called ‘cult’ value to them amongst a bunch of underground tape trading maniacs back in the day – especially among those people who loved the sound of HELLHAMMER – and whatnot, VENOM, BATHORY, AMEBIX such early troops of obscure and morbid sounds. I personally never came across BLACK PROPHECIES during my tape trading days, so finding them now – after 23 years later by the help of this collection of their past stuff, unfortunately doesn’t have the same ‘hell yeah!’ effect on me personally as this may have on some others of you. But if raw, unpolished and HELLHAMMER-tinged extreme Metal is your cup of tea, then this disc may well be worth your time. More about these obscure blasphemers can be found at: www.facebook.com/blackprophecies, label: www.elektroplasmamusik.eu