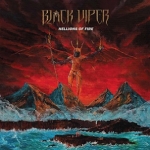 Norway has a long and proud heritage of producing Black Metal bands, but when it’s comes to traditional Heavy / Speed Metal, it’s a brazen land to seek out. However, the spirit of the glory days is transcendental and keeps taking forms to express itself defying the time and space. BLACK VIPER took form in Oslo around 2016 as a solo project by Cato "Sadomancer" Stormoen (DEATHHAMMER, CONFLAGRATION, BLACK MAGIC) and lately guitarist Arild Myren Torp (NEKROMANTHEON, OBLITERATION), bassist Christoffer Bråthen (CONDOR, GOGUE) and singer Salvador Armijo joined the force to transcend that fury spirit of traditional Heavy / Speed Metal drawn from the roots of the genre from the early 80s. Their maiden offering, a demo titled “Storming With Vengeance” which was released in 2016, was like an energy flare of pure Speed Metal attack. While the debut demo releases of such collaborative projects are always perceived with awe because of the members involved but most of the time they fade away shortly after or lost the will power amid recurrent schedules. However, BLACK VIPER was not lost in the meantime and seems like preparing hideously to release its venom like spitfire, their debut album “Hellions Of Fire”, which is now released from the prestigious High Roller Records, the house of traditional Heavy / Speed Metal and NWOBHM in a modern era. Without any doubts High Roller Records have hawkeyed watchers and they deserve praise for spotting the real venomous BLACK VIPER amid many toothless snakes. The recordings of “Hellions Of Fire” began in Bomberommet, Kolbotn around Fall 2016 and were finished in Spring 2018 at BSN Studios. Among the seven titles of “Hellions Of Fire”, three titles are taken from their demo of 2016 and altogether BLACK VIPER delivered an engrossing headbanging fury for more than three quarters of an hour. Turbo charged speedy rhythms which are added by lethal riffs fueled by maddening high choruses. The worshippers of SAVAGE GRACE, AGENT STEEL, OMEN, NASTY SAVAGE, EXCITER, RAZOR, MANILLA ROAD and CIRITH UNGOL will find themselves being euphoric and thrilled with sensations while listening to “Hellions Of Fire”. Production wise this record sounds a lot smoother than in the early eighties, however BLACK VIPER certainly knows how to approach that warm and engrossing sound to create an authentic atmosphere which brings profound sense of joy at the end of adrenaline rush. The smooth production of “Hellions Of Fire” provides sufficient attention to the fast bass and drum parts although the speed at which Stormoen drives the engine is considerably electrifying. In addition to the rhythm section, it’s Arild Torp’s stimulating and mind bending guitar work that will keep the attention of anyone like being possessed by magic spells. Vocalist Salvador Armijo is a bare-bone, spitfiring style of vocalist who has a lot of edge in his vocal lines and provides a perfect narration to the hellfire being unleashed by the rest of the band. The sheer earth shattering high shots and soul piercing screams by Armijo magnified the energy of this record unto many folds. The set is very precise and though the lengths of a few titles exceeding seven to ten minutes, but the strength of the compositions and the seamless transitions wouldn’t let anyone bother or simply even think about the lengths. Just listen along to ‘Quest For Power / The Fountain Of Might’ and ‘Nightmare Mausoleum (The Sleeper Must Awaken)’ to understand the strength of transitions and narrative creativity of this record. And, titles like ‘Metal Blitzkrieg’, ‘Storming With Vengeance’ and ‘Suspiria’ are placed brightly like branches of energy and fury. Discussing the record Stormoen expressed, “The album is pretty much a mix between Heavy Metal and Speed Metal (fast Heavy Metal anyway). Anyway, I would say we sound like Metal from all over this rotten earth, mainly US Metal but also European sounds”. In an exercise of the old school where the band’s unique character and artistic voice blended, one hind sighted treasure is BLACK VIPER’s guitarist Arild M. Torp, who embodies his magical capability of writing riffs across a variety of genres and it’s no exception here. In this modern era, the prospect of re-energizing the spirit of the glory days by spirited new acts like BLACK VIPER, ARMORY, EVIL INVADERS, ENFORCER, RANGER and SKULL FIST are meaningful. And encapsulating blistering Speed Metal with a heavy NWOBHM influence in “Hellions Of Fire”, BLACK VIPER shots a masterful nod to the influences that raged in the first half of the 80s. Explore more about the band at www.facebook.com/blackvipermetal, and visit their label page at www.hrrecords.de