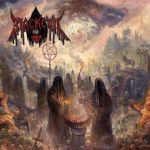 I didn’t expect nothing than an authentic German Thrash Metal band at my first approach with BLACKEVIL, probably a name that still has to be more popular in the underground but surely the involved members are not newcomers, having been formed by Abyss (ex – UNDER THE SPELL) on vocals / bass and Hellbastard (ex – NOCTURNAL) on drums, later joined by the guitarist Deathinfektor. They made the debut with the EP "Hail The Cult" in 2015, after which a change in the drummer slot happened with the entrance of Doomwarrior. "The Ceremonial Fire" is their first full-length, supported by F.D.A. Records that keep to broaden its roster with killer bands, from Germany and somewhere else. It contains eight tracks that, without mince words, evoke the times when Thrash Metal, Black Metal and Death Metal were hard to file, when bands as BATHORY, SODOM, VULCANO or MORBID were really extreme and had an original sound. The goal of this trio from Bavaria / Württemberg is not to play original but it’s the opposite way, they just want to play Heavy / Thrash with an 80s Black Metal touch. It’s really difficult to avoid the classic cliché of this formula, actually they don’t, anyway, songs like ‘Seven Bridges, Seven Gates’ or ‘Under The Black Sail Of Burning Cross’ are the result of good ideas and real attitude. The Abyss’ vocals are one of the most interesting elements here, with a frightening and expressive use of high pitches and screams. The instrumental performance is pretty good, they don’t need extreme techniques or fruitless virtuosity, just heavy riffs, epic melodies and simple rhythms in 4/4 time. If I have to chose one band that influenced BLACKEVIL the most, I should say DESTRUCTION, but I think that some Power / Thrash Metal acts as PARADOX, METAL CHURCH, old ANGEL DUST and IRON ANGEL have been important too for the songwriting of this album. ‘The Ceremonial Fire’ is an impressive debut from my humble point of view, so give it a chance. More information at: www.facebook.com/blackevilmetal, www.fda-records.com