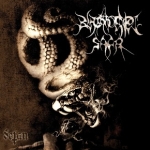 Fast, quasi melodic Black Metal with a War Metal touch is what we have here on the second album of this Polish foursome. At times they sound a bit like early MARDUK while others they have a strange sound which reminds of a very raw and almost warlike Metal version of DISSECTION. The fact that songs are done in their native language at least in this case makes no difference as the vocals are a bit quite one-dimensional. There are also some quite interesting trance-inducing riffs here and there that give them quite an identity, although I do feel some guitar solos are at time out of tune with the main song. Still, I sense some sort of experimentation in the songs, as they do not sound like your conventional song structure in Metal. There is that chaotic feeling quite present that makes the band have a somewhat distinctive character, a cold mechanical sound. The band does in fact manage quite well to do mid tempo and fast rhythms without sounding generic, but at times the chaos induced aura in the more Black Metal riffs, take away a bit of power in the essence of the songs. Still, there are quite interesting things here, the more Death Metal sound, which is a bit BOLT THROWER-ish gives them an interesting sound, especially in mid tempo songs. Fans of bands like DIOCLETIAN and similar styled units, will surely need to check this out! www.blackhornedsaga.com, www.hellshop.eu