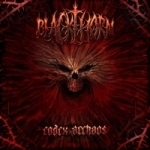 Five Russian goddesses in BLACKTHORN give a good run for your money to become the Russian version of CRADLE OF FILTH? Well, perhaps not, so let’s simply skip that "becoming" part, acknowledging at the same time that BLACKTHORN do have something a bit more to offer on the band’s 3rd album, titled "Codex Archaos", than just those occasional twists reflecting some of our British dark lords’ love in everything Gothic. Symphonic, pitch-black, strongly executed, matured – and partly even operatic Black / Gothic Metal is what BLACKTHORN perform on "Codex Archaos", and they do it with such a strong conviction that most probably even drops a few jaws completely wide-open, I believe. When it comes to the album’s production itself, it’s also great to notice that every instrument has been put in an equal position. None of the instruments (violin, grand piano, guitars, etc.) that have been used to create BLACKTHORN’s Gothic-tinged dark realm on this very epic sounding opus, outshine each other but support perfectly the band’s ultimate strife to reach something extraordinary pompous yet chilling for this record. And that’s where they have well succeeded at in my sincere opinion too. Aina’s beautifully sung soprano vocal parts combined with Elvira’s rancorous sounding Black Metal type of growls together, create a nice contrast for the band’s overall top-notch performance on "Codex Archaos" – like building up a vision about sort of an ultimate battle of good and evil or something like that. You got the picture anyway. One of BLACKTHORN’s strongest assets, is to write such song compositins that tend to be kinda unpredictable in terms of having many different layers and unexpected twists and turns in them, sort of challenging the listeners quite a bit but still in a good way. There’s just one last thing I would like to say about "Codex Archaos": the album’s surprisingly yet sincerely brilliant, I really must admit that. Will surely keep my eyes on these girls’ future endeavors release-wise. BLACKTHORN can be found at: vk.com/blackthorn_metal, label: www.msrprod.ru or www.myspace.com/msrprod

BLACKTHORN - The Rotten Ways Of Human Misery - by Michael Oelschlegel