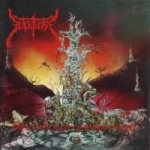 Hailing from the darkest depths of the Mexican underground, BLACKTHORN can be considered as one of the pioneers and better acts from the Mexican underground Death Metal scene of the early 90s – together with cult acts like the mighty SHUB NIGGURATH or MORTUARY. Their one and only album "The Rotten Ways Of Human Misery" was originally released more than two decades ago by Avanzada Metalica, a partner label of Denver Discos, which released some cult stuff like SAVAGE THRUST or MORBID SAINT. This five piece from Mexico City might be an unknown quantity to most underground deathbangers. One fact was for sure the poor distribution to of the label’s releases in Europe as mostly only well assorted shops with a wide and fine selection of imported goodies were able to offer their stuff. Another important fact was maybe that the Death Metal wave already reached its peak back in 1992 and these warriors from the land of the Mayas offered solid but no groundbreaking stuff. In retrospect and the fact that this little silver disc has been unavailable for a long period of time, this re-release by Gates Of Hell Productions makes for sure some sense. But first off all the negative impressions of this reissue. The album looks and sounds like a 1:1 copy of the initital release and it differs in no way from the original pressing except of having printed the new label’s name somewhere on the booklet. When it comes to re-editions I’m the type of person who enjoys to get some more stuff like pics, copies of old flyers, some liner notes or just some historic background. Despite that lack of information the music compensates for all – and this is the most important fact, isn’t it? BLACKTHORN plays classic old school Death Metal similiar to the Tampa scene of the early 90s, heavily influenced by DEATH or MASSACRE. Adding slight traces of AUTOPSY’s morbidity and some ingredients of their countrymates TRANSMETAL into the cocktail as well. You can also hear a few Thrash elements in their sound / riffing. All is played very well on a good technical level so you get everything what you expect from a solid Metal of Death album from that era. Crushing fast to midpace riffs, some nice bass lines, pounding drums, nice leads and a voice similiar to Evil Chuck. The Scott Burns inspired production blends it all well together and is for sure one of the best one’s coming out of South- or Central America. All instruments are audible very well. A great lethal assault from the past which should actually please all maniacs being fond of that kind of genre. One more album that has slumbered in obscurity for many years which can luckily be discovered finally again. For further information or orders please get in touch with the label: gatesofhellproductions@yahoo.com.mx