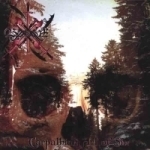 Don’t you think the logo looks quite familiar? Yeah, I do…I mean it is… almost like… yeah, like that HELLVETO thing logo, I mean… it is the same! I can foresee a big lawsuit and copyright infri… wait… oh… the same label… the same guy… nah, cut it out. The label says it is Black Metal… Ok, let me give it a try… it start with an intro…a long one… really long one… Push the next button for Satan’s sake! Yeah, sounds like a good idea. Hey! What’s this? Another intro? I mean keyboards, classical music, this sounds like the soundtrack of a movie or something… pressing the “next” button again… another intro…I mean song. So? Is it Black Metal? No way… it is some sort of intros… er…I mean classical music done by a guy that plays in a pagan Black Metal band… but no it is NOT Black Metal…I mean you can put this one in the classical or soundtrack section at the music store. So why do you think it was released by a Heavy Metal label? I suppose it is because the guy from HELLVETO had all those intros laying around and offered them for cheap or something… maybe, if they put both releases together as a project or something, it might be more attractive for the Metalheads. So, what do you think is the final result? Well, to be honest, it is not that bad as an instrumental disk, and I must be honest that it comes in a great looking digipak; if you tell me that this is the soundtrack to some epic movie or a video game, I would say it is quite good. But we are talking about Heavy Metal here, and this is definitely not that. Yeah, there’s a relation to a Metal band, but that’s about it. If you are more open minded and like classical music or intros or that stuff, yes, I would recommend it. Otherwise, look for HELLVETO instead, it still gets a lot of intros and classical music, yet still gets some Metal. There you go… www.pulverised.net