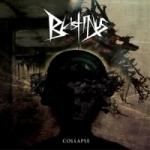 I don’t remember caring much at all about the debut full-length of this Finnish hybrid of Grindcore and technical Death Metal, BLASTANUS, even if a part of me found some of their stuff pretty appealing, but then again I ended up seeing them as a downright faceless and unoriginal act after all. The band’s 2nd full-length – titled "Collapse", fortunately manages to chance much my mind for a more acceptable direction regarding my first, not-so-fruitful meeting with this 4-piece act. True, I have been listening to the band’s 2nd attempt with some mixed feelings again, some of me liking what they do – and this other half slightly pushing me away from them due to the same reasons I confronted with the band’s debut opus, "Odd". Sure thing, there’s a lot of potential in BLASTANUS – and at best the band manages to shred your anus to pieces by their very hostile, in-yer-face and grinding, modern sounding Death Metal manifesto that makes you feel you have gone through a meat grinder in the end, wanting it or not. There’s certain unexplained charm and fascination around BLASTANUS that invite me to their meat grinding feasts every now and then, leaving a tolerable aftertaste on the surface of my spoon after the last bits of the main course have been swallowed down to my throat. BLASTANUS – in a way at least, pay some homage to the Kansas-based brutal tech Death-grinders ORIGIN, molesting the same elements within their high-octane grinding Death Metal wankery as their big brothers in ORIGIN do. By lifting this particular comparison out of the pack, I bet BLASTANUS will certainly arouse some interest around them as I know ORIGIN enjoys a pretty huge amount of popularity in the States at least. "Collapse" is a tad better and way more solid wholeness all in all from BLASTANUS when comparing it to their 16-track debut that was flying round too much in my opinion, without having almost anything to hold on to. I could see the fans of such acts as ORIGIN, ROTTEN SOUND, NECROPHAGIST – and let’s say DECREPIT BIRTH, finding BLASTANUS’ "Collapse" pretty appealing to themselves. This is sick ‘n brOOtal indeed, uh. www.myspace.com/blastanus1