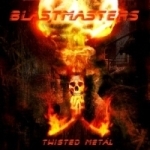 Members of this chaotic American Death Metal band have been lurking in bands like PESSIMIST, DIABOLIC and UNHOLY GHOST, among others. Aantar Lee Coates seems to be the driving force behind this band. He is the drummer and has been in the underground for a lot of time; I do remember him from the band EXMORTIS. Well, I just think I have heard some bands that derived to what we have here, and they all share a similar style. That is a blasting (well, what were you expecting from the name?) and massive Death Metal, which more or less refers to bands like early DEICIDE and in a bigger part to early MORBID ANGEL as we can listen in songs like ‘Shellfires And Tombstones’. There is more than a slight touch of technical Metal here and there, and a strong Thrash sound. This album was supposed to come out at least 3 years ago, but due to endless trouble it just got released this year. Was it worth the wait? Maybe. I just have the impression that although the band is very tight, has a very good drummer and is able to craft some very punishing riffs here and there, they still are not able to break a mold of another American Death Metal band, although a very competent one. The productions is very good, although it all seems way too “compressed” for their own good, thus making the guitars and drums to sound a bit synthetic, for a better word to describe it. I can sense a bit of European flavor in some compositions. Other songs like the killer ‘The Beheading’ at times evokes some sound comparable to SEPULTURA in the “Schizophrenia” era, although a bit faster. The vocals courtesy of Jessy Jolly are quite very good, and he uses a good variety of tones to drift away from a monotonous one-dimensional approach many bands of similar style use. Also some parts do have a hidden Black Metal tinge to them. As a bonus they have added their debut demo, but there is an almost unforgivable detail here. The demo songs were mastered in a way lower volume, thus making this sound out of balance. Besides this mistake, the demo material keeps in the same style shown on the album with the fast guitar riffs and blasting drums. A final overall view of this product, speaks of a very competent Death Metal band, capable of some killer riffs, yet still missing something to make it outstanding. At times it does sound a bit too “safe” played, and the overall tempo is quite similar form song to song, with few slower moments. Even for the uneducated ear, this will sound very American, and might be compared to another CANNIBAL CORPSE alike band rather than appreciating the real strength that lies within. Now years after this has been recorded, I just wish they decide to try a more personal guitar sound, go for a more warm analog production ad keep things straightforward. The awful too modern cover art and logo, might as well confuse you that this is a FEAR FACTORY kinda thing. Competent Death Metal , that could be more interesting. But It gives hope for a new recording, whenever it will came. www.deathgasm.com, www.myspace.com/blastmasters