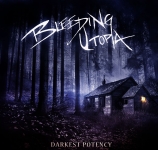 BLEEDING UTOPIA started in 2003 as the side project OPERATION SIDEFFECT and then changed name to DELICIOUS DEFORMED before being put on hold in 2004. In 2009, mastermind Andreas Moren brought back the band and recorded a promo release in 2010 and that led to their debut album under Wormhole Records. And now they have just released their second album "Darkest Potency". Death / Thrash is a really fitting description of their music. The mid-paced attack of Thrash Metal with blast beats and the heaviness of Death Metal. All combined with a powerful voice. Surprisingly, "Darkest Potency" doesn’t sound Swedish. It actually reminded me of and early (and faster) MALEVOLENT CREATION, although BLEEDING UTOPIA are no copycats at all. The album showcases solid riffing and good songs structures. They also add some melodic passages just to break the somewhat constant vibe of the album. This is good, since most songs clock between 3:45 and 4:45 minutes. The production is a highlight here. The thick guitar / bass tone is rounded with a great drum (triggered?) sound. The mid-range grunt combined with high pitched shrieks à la DEICIDE are well placed where needed. There are also some modern sounding riffs, but I don’t think these guys had "Classic Death Metal" in mind while composing this album. Personally, I think this is the way to play Death Metal sans the boring "old school" tag. These guys set their goals in crafting a really solid, modern album. They could use some more variation with the vocals, but there are riffs a plenty, which makes "Darkest Potency" a really enjoyable and interesting listen. I recommend you to listen to "I Will Return". That song features some of the best riffs, variations and a really tight groove. Catchy, dare I say. Again, a surprisingly good and different Swedish Death Metal album that will keep you head banging for 40 minutes. More info here: www.bleedingutopia.com, www.facebook.com/bleedingutopia, www.bleedingmediaproduction.com

BLEEDING UTOPIA - Demons To Some, Gods To Others - by Jaime Pérez