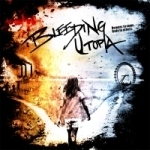 BLEEDING UTOPIA
Demons To Some, Gods To Others
(WormHoleDeath Records)
47:23min

Sweden’s Thrash / Death Metal newcomers BLEEDING UTOPIA have released their debut album "Demons To Some Gods To Others". The band started out as a side project back in 2003 and really became a full time band in 2009. Consisting of ex members of ASTRAL CARNEVAL, SKYFIRE, and LOCH VOSTOK these guys have much to prove in the over saturated Swedish Metal scene. Based on their bio, the band had released a 4 song demo back in 2010 that was well received and attracted the attention of Worm Hole Death / Aural Music Group. Today we get 10 tracks that run at just over 47 minutes of play. The party gets started with some blistering drums and the first thing I noticed was that the band has a bit of a Metalcore feel to their music on their first track that is mixed with the thrashy sound of Swedish Death Metal. The production on this album is excellent and does the band justice regarding hearing each instrument clearly. ‘A Life’s Decay’ is a track that really stood out to me. The guitar riffs and guitar solos were well written and really help cement the direction of the band’s music. The vocals are understandable and you can make out the lyrics for the majority of the songs yet the vocals still provide an extreme factor. The band slows down the rpms for the next track ‘Into Pieces’. The chugging riffs and militant feel appear with ‘It All Ends Here’, a very eery yet seductive track that gets your head to bang. The music shows that these guys really know how to write some excellent music tracks. At times I get a old-SUSPERIA feel to their music as well especially in tracks: ‘Iron Crosses To The Brave’ and ‘BTK’. Each song seems to stand on its own and does not suffer from monotony which is always a plus in these days since some albums just sound like one long song. BLEEDING UTOPIA have made a solid effort with this debut album. Fans of EXODUS and modern era Black Thrash should give this band a try. The guitar solos are just epic, I could not get enough of them. BLEEDING UTOPIA are still a young band but they have the skills to get things done. Let’s see what waves they can make in the near future. www.bleedingutopia.com, www.myspace.com/bleedingutopia, www.facebook.com/bleedingutopia, www.wormholedeath.com