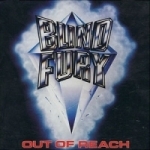 I suppose (and I hope) that many of the VOICES readers are also interested by traditional Heavy Metal the way it was played in the 80s. I admit that I overlooked this one and only BLIND FURY offering when it came out in 1984. But better late than never, I am glad to present this reissue to you. Some of you may know that BLIND FURY are none other than an offspring of the mighty SATAN, a legendary UK band who put out one of the ten best Heavy Metal albums of all times, namely “Court In The Act”. Tired and annoyed by what they saw as a rather cliché and inaccurate moniker, the SATAN’s musicians choose to release their second album under the name of BLIND FURY, with a more commercial approach, according to them that is. Well, with hindsight, this album is anything but commercial – sounding to me, only a bit more melodic than the first SATAN, but delivering the same aggressive energy. Expect a fantastic slab of furious Heavy Metal mayhem unrivalled until today. BLIND FURY combine stellar musicianship (the guitar solo trade-offs by the pair Steve Ramsey / Russ Tippins can make frantically salivate every self-respecting Metalhead), superb vocal work courtesy of Lou Taylor (who replaced the already exceptional Brian Ross, the singer of SATAN and BLITZKRIEG), a solid rhythm section and above all an outstanding ability to compose very intricate songs. To give you an example, a track like ‘Evil Eyes’ could have been featured on any of the two first MERCYFUL FATE albums, so much the style is the same. And no wonder, as the members of SATAN / BLIND FURY shared a mutual admiration and a friendly rivalry with the Danish gods of Dark Heavy Metal, and also they were on the same label, the sadly defunct Roadrunner Records (lost for the Metal world that is). Strangely enough, BLIND FURY are not English sounding, they rather share a lot of common traits with their American counterparts. And yet “Out Of Reach” was initially issued in 1984, in a time when the classic melodic American Heavy Metal had not fully reached its plenitude. So I am sure BLIND FURY had an unsuspected influence on bands like VICIOUS RUMOURS to give you an example (listen to ‘Back Inside’, it could have been on “Digital Dictator” without any problem). One of the most striking points of “Out Of Reach” is certainly the aforementioned superb vocals of Lou Taylor, it is truly a delight when he takes the high notes. It was then the golden era of very powerful high pitched vocals, sadly gone today. I regard this album as essential in any serious Heavy Metal collection. Total Metal mastery, and yes, out of reach of many aspiring Metal “stars” of the present days.