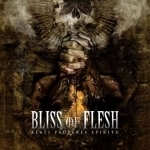 Combining Black Metal with Death Metal – or Death Metal with Black Metal (yep, I should stop this nonsense right here, I know), always works for most of us. A hybrid of both aforementioned sub-genres of Metal can create some amazing results whenever done well. French BLISS OF FLESH, have baptized their swords deep in both Death and Black Metal, but especially in the first mentioned genre. "Beati Pauperes Spiritu", which happens to be the title of their 2nd full-length outing (they released their debut album "Emaciated Deity" on German Twilight Vertrieb in 2009), is undoubtedly the band’s most ambitious and matured work to this very date – at least everything reeks of just that. BLISS OF FLESH may not have done little miracles by fusing some modern Death Metal with Black Metal but the outcome is a complex and very varied sounding effort nonetheless – and most importantly, it manages to keep a listener’s attention pretty well from start to finish. As was said there already, BLISS OF FLESH’s blackened Death Metal comes across very complex and even kinda epic at times, having many nearly unorthodox tempo chances, furious blast beat infested runs, sticking melody lines – and other more or less enjoyable elements that can be considered as true ear candies for extreme Metal fans. Such names as DISSECTION, VADER, DIMMU BORGIR and BEHEMOTH at least, seem to stick out from the stuff they do on "Beati Pauperes Spiritu", as some of those fair band comparisons, using Death Metal growls, Black Metal snarls, spoken vocal parts and even clean vocals, kind of cleverly within the entire material they have gotten for this record. Lots of complexity of song structures and unrestrained brutality their songs are full of, which naturally set a bar of tolerance and adaption to a certain level regarding how demanding "Beati Pauperes Spiritu" may turn out to be at times. After a few spins, the album becomes easier to chew on, giving more out of its content than what your first impression about this record might be. This is for all fans of extreme Metal genres – check it out! BLISS OF FLESH: www.facebook.com/blissofflesh, label: www.non-serviam-records.com