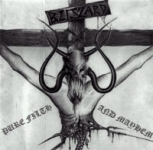 VENOM!!! MOTÖRHEAD!!! And as well I can end the review here. But then again, that’s not what a review is for, right? Well, BLIZZARD might evoke an IMMORTAL album, but no, it is on a different way. To start with they are a German trio founded back in 1998. Members of the band are also active in other bands like MORRIGAN and WITCHBURNER. So this might be a project for the members to have some good fun and talk about beer and being a mindless Metaller. Which is basically what the lyrics are all about with titles like ‘Alcoholyptic Nightmare’, ‘Rock’n’Roll Terrorist’, ‘Metal Is Violence’ or ‘No Beer Until Metal’ I just let your mind to make conclusion on what the lyrics deal with. So, do we really need another crazy beer-lust Metal band? Well, on one hand, this kind of music style is for a casual Metal listening. I mean, the one you put in your car, while driving a convertible with beer in hand… well, if that is legal in your country. It is a no-compromise, no-brainer riff-o-rama of very simple structure, thus sounding a lot like old Rock’n’Roll, hence I compare it with the bands on the beginning of this review. Then again, most kind of recordings fits the music really good, and in this case, it sounds raw, yet well produced, if maybe, they do use and abuse of the bass overtones. The vocals are more in the Cronos vein than in the Lemmy territory, but it is noticed that the vocalist tries hard to pronounce the words even in that raspy style he uses. After a while, I must admit that the vocals are probably the reason why this sounds all way too similar, given the fact that the simple way of performing also makes it all sound alike. Add here and there some well done guitar solos, and some tempo changes, and voilá, it is done. This album I must add, is a re-release from their debut from 2001 and added their EP of 2008 “The Return Of Pure Filth And Mayhem” now combined onto one CD and both available for the first time in that format (both chosen titles also reveal two other obvious influences of BLIZZARD: TANK and WARFARE – Frank). As it is, it does not offer nothing we have not heard before, being it from the originators or the countless other bands of similar style. Yet, it is an entertaining album, for those who don’t care to listen to the same thing performed by different musicians. On the other hand, I am getting sick and tired of those bands more akin to Rock’n’Roll done by Metal musicians. I like my Metal the way some keep it, thank you. I feel no need to get back to the origins of Metal music. That’s why I have KREATOR records and not LITTLE RICHARD vinyl. They might have come from the same source, but in the end I only choose one way. And, add to that the fact that NO ONE can top VENOM or MOTÖRHEAD in their good days… not even themselves. So, why try? In this case, I like the main bands of the members more than this project, and although I must admit it is at times so dumb it is fun. At the end of the day, it would be one of those discs that will be collecting dust for long time. Metallers with less ambition in their music and not wanting to hear the original ones will dig it. The more picky ones might like a few songs until they want something more Metal or just go back to the originators of the style. www.myspace.com/blizzardoffiziell, www.undercover-records.de