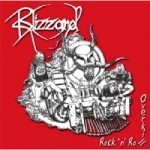 Off the cuff, swagger drunk feel. Rock beat starts ramroddin yer firkin ass. Raw dog rawk with total Motor-feel and big ballsy sound. Here, the rock is as loud and hard as it gets. It’s dirty classic Metal but it’s kinda Punk, too. The guitar tone is perfect. The performers play it straight and mean. The anthems are okay enough, but the vocals are an acquired taste. This is mainly due to the ‘brute’-style almost like a troglodytic halfbreed of Cronos and Lemmy. Personally, I dig the beefy, plaintive character I hear in the vocals and the dark and cynical yet dumb and fun-craving lyrics. Even still, sometimes the Deutsche enunciated English is syllabically humorous. Frequently, it’s downright amusing in an absurd sort of way. That’s the only criticism if you could even call it that, really, the band is tight and, as promised, the rock doth cometh in spades. The raw attitude and morbid humor of the band goes along way, but again, this is an acquired taste unless you actually like bands like MOTÖRHEAD, SAINT VITUS or CARNIVORE; or you’re just a slave to the allure of real Hardrock. It’s a ‘Rock’n’Roll Overkill!’, "Shout it Out Loud and Say, Hell Yeah!" You want to "get ‘Killed By A Blizzard,’ Yeah!" And if you let it happen, it’s true! Special note: there’s a sweet Jazz organ added to a SABBATHy, heroin-themed track called ‘Nightmare’, which is totally killer, “…Forced to See the Dead!” I like BLIZZARD and so should you! www.myspace.com/blizzardoffiziell, www.undercover-records.de