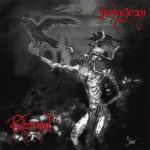 Being that I really enjoy the pre – MORRIGAN band MAYHEMIC TRUTH and the first MORRIGAN record, I like to check back from time to time to see how their latest stuff sounds. While, in my opinion, they haven’t put out music as awesome as those albums, MORRIGAN is still a worthy band. This split is kind of an interesting idea because BLIZZARD and MORRIGAN take turns every other track and they use the same studio settings. In other words – same guitar sound, drum production etc. In addition, both bands share the same drummer, Balor. This can be a bit frustrating at times for drumming fans like myself, because Balor is somewhat clumsy behind the kit. Anyway, for those who are unfamiliar with MORRIGAN, they play a style very much influenced by both early and Viking era BATHORY (f.ex. the song ‘Graves’ has a hellacious resemblance to ‘Call From The Grave’). Vocalist / guitarist Beliar alternates between a grating rasp and a mournful clean voice, à la Quorthon. BLIZZARD reminds me of MOTÖRHEAD with a pinch of early RUNNING WILD; simplistic Heavy Metal with bellowing vocals. Overall, a nice diversion of 80s style Metal. Find more at: www.facebook.com/official.blizzard, www.undercover-records.de