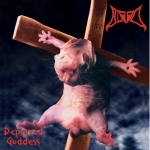 German Death / Grind godfathers and pioneers BLOOD have been bulldozing and grinding minds since the late 80s and this, their 5th album released in 1996, shows a band definitely sticking to their roots in a time when playing such music was not too popular, something this writer always admires in a band. BLOOD come from that old school of Death and Grind with an organic thick sound / production which is full of depth and heavy buzzsaw riffs, bludgeoning bulldozer bass, manic powerful percussion and a mix of deep growled vocals and higher harsh vocals, although the vocals are mostly of the growled type. The songs are straight to the point blasting out of the speakers like a savage storm of fetid fury and there are more dirty hooks than in an abandoned old slaughterhouse which will embed themselves into your skull with the subtlety of an axe blow to the head. BLOOD have the same impact as earlier NAPALM DEATH, REPULSION and TERRORIZER and it is great to see such a release from the mid 1990s that was grinding full force without a second thought of the trends of the day and is a recording that well deserves a re-release and will hopefully see the band and album gain more new fans and listeners. There is something endearing about the straightforward and simplistic approach to their songwriting and playing which is what makes such music so timeless and loved in the first place. There is a good mix of tempos throughout too and it is not just relentless blast beating, I must mention the reverb on the snare which is a nice touch to the overall sound. This re-release is comprised of 24 tracks overall including the bonus addition of tracks from splits with PSYCHO and MYSTIC CIRCLE. Pick this up and GRIND YOUR MIND! More info at: www.facebook.com/blood.de, www.vicrecords.com