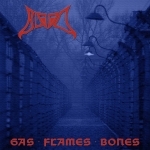 “Gas. Flames. Bones.” is the sixth full length album released by the German band BLOOD in 1999. A primitive and forgotten gem of European Grindcore, recently reissued by the Dutch label Vic Records in a special CD version that also includes a cover of the classic song ‘Wizard Of Gore’ by the legendary American Goregrind band IMPETIGO. Here we have the typical Grindcore sound from the late ‘80s and early ‘90s: a mixture of NAPALM DEATH, UNSEEN TERROR, early BRUTAL TRUTH, TERRORIZER, AGATHOCLES etc. A total of 22 songs for almost 30 minutes of raw violence: each track is no more than a couple of minutes. The “core” sound is very prominent with tons of d-beat and Hardcore parts. Then we have some chaotic, brutal and aggressive accelerations, as required by the genre. The problem with BLOOD – but it depends on your taste if it’s an issue or not – is the lack of quality in terms of musicianship. The overall approach is very DIY, but, since BLOOD is a Grindcore band, it’s quite tolerable. The riffing is very basic and the drumming is pretty poor sometimes, especially in the blastbeat parts which are played with the single foot technique, but with a bass beat on each quarter note. The result is pretty good, though, but if you think how many killer drummers were active in the late ‘90s, it makes you realize that certainly more could have been done. Another point that doesn’t convince me is the volume of the snare in the mix: too loud. The vocals, on the other hand, are very intense and pretty reminiscent of Mark "Barney" Greenway’s style. That said, rawness and Grindcore go hand in hand and “Gas. Flames. Bones.” is a good example of old school grinding violence from Europe. www.facebook.com/blood.de, www.vicrecords.com