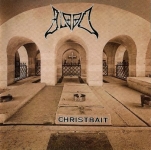 Anyone remember this band from Germany? Probably yes! In the ninetees their moniker popped up in some underground mags, but later on it became so silent (not their mistake) that you’d forget they still existed and still are for almost 30 years! In these three decades the band released 7 albums, of which ”Christbait” was the second one, being originally released in 1992. This re-release from Vic Records features 5 extra tracks, ‘The Greed’, ‘Down To The Swamp’, ‘Technical Abortion’, ‘The Head Of A Dead Cat’ and ‘Terroraise’. People not familiar with their style, imagine some raw and grindy Death / Grind. Something like a mix of WOMBBATH and early PUNGENT STENCH. Pretty common in the early ninetees, but still enjoyable now in 2015. Not because it’s so excellent, but because it’s heavy and pure. Most tracks clock around 2 minutes which is way too short to become boring. Everything is brutal: riffs, production and drums, but most of all the vocals of Alex. Like Frank Mullen (SUFFOCATION) and Barney (NAPALM DEATH) but less growling. What’s cool is that occasionally the brutality is completed by a dark sample or riffing. I don’t know why, but everything about this is cool, even though they don’t break any speed limits or come up with the most heavy or intense stuff. As far as I’m concerned these guys never released anything bad, so check this out. On top of that, this version contains a complete new booklet, designed by guitarist Eisen with extensive liner notes and many rare pictures. For more info, check www.facebook.com/blood.de, www.vicrecords.com