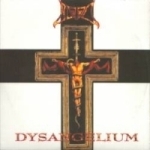 21 songs in 39 minutes says it all, right? BLOOD’s seventh album purposely doesn’t offer big stylistic surprises. This German Death / Grind band has been around since 1986 already. Their old school sound is rather primitive but well executed, some of their riffs don’t only kick some serious ass but offer creative ideas at least I haven’t heard before, just like on ‘Poison For The Soul’. Definitely an enjoyable album written to be played live. Some cool movie samples add spice (“He wouldn’t even harm a fly” is from Psycho, right?), so don’t get scared by the angelic intro. By the way, on ‘Devil Dance’ that female voice appears again and absolutely fits into the brutal structure of the song, cool contrast to the brutal grunts! I’m pretty impressed that after 17 years in this business BLOOD still sound this fresh and enthusiastic! www.bloood.de