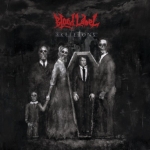 Combining successfully different sub-genres of Metal, is always a somewhat hard task to achieve – at least the way that it would be make a pleasing enough wholeness for everyone. New Danish Metal act BLOOD LABEL (that features members from such Danish names as HATESPHERE, DAWN OF DEMISE and THE BURNING) have not only chosen one sub-genre of Metal for their musical journey but tried their own wings a bit in Death Metal, a bit in Thrash Metal and even a bit in a modern sounding Metalcore, sort of just to find out how they would be able to melt all these aforementioned genres into one convincing package. The band’s mission to make people’s underpants heavier and quicker on their debut album "Skeletons" than what may happen when getting an invitation from Mr. Hefner to visit his luxurious Playboy Mansion for one crazy weekend, apparently does not quite happen really the most ideal way but for these particular Danes’ advantage it needs to be said their molten, pissed-off sounding and very much angst-oozing groovy Metal flows pretty nicely indeed, chiefly in the spirit of later era ENTOMBED, THE HAUNTED and CROWBAR. There’s also quite a few modern, ‘Metalcore-ish’ elements incorporated into their songs, which I personally don’t care that much for. Otherwise BLOOD LABEL seem to pump out enormous energies through their songs, and even a pretty entertaining yet ear-pleasing way even. "Skeletons" is full of extremely heavy riff parades that also tend to go through one concrete wall after another somewhat effortlessly. Just try such songs as the opening track ‘Deliver Me From Evil’ or ‘Bad Blood’, just to get familiar with guitarists Alexander’s Jesper’s heavy, well targeted riff bombardments. These two aforementioned guys do their job truly well at the 6-string department indeed, no doubts. Also vocalist Kenneth seems to add an extra dose of fury and wickedness into the band by his very angst-ridden vocal delivery, sort of underlining a bit more BLOOD LABEL’s seriousness to come punching your face. Tue Madsen’s production on "Skeletons" is also pretty much spot-on for the kind of a band that BLOOD LABEL represents musically. Well, made it this far perhaps? My sincere congratz then… now you may want to check "Skeletons" out too, right? BLOOD LABEL can be found at: www.facebook.com/bloodlabel, label: www.mightymusic.dk