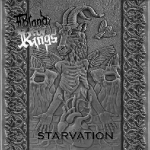 This particular BLOOD OF KINGS in question, comes from Seattle, Washington, and they have chosen to perform a heavy, straightforward combination of Heavy and Speed Metal on the band’s debut album, titled "Starvation". BLOOD OF KINGS have been around since early 2011, and there’s only one 4-track demo released from them in 2011. This trio trusts old school Heavy Metal more than anything, putting quite much emphasis on the NWOBHM sound while adding some elements from early Speed Metal into it (IRON ANGEL, RAVEN, EXCITER, and such), just to obtain a bit more special sound for themselves. It makes the band’s package work in a pretty nice and pleasing way for them indeed. The vocals are the only minor thing I’d like to complain about, just a bit. These nasal, Thorsten Bergmann-esque (LIVING DEATH) vocals need to get used to a bit, but in the end of the day one could say they probably could be the only type of right vocals that really fit to the kind of stuff BLOOD OF KINGS do on "Starvation". You know, when you first heard CIRITH UNGOL’s "King Of The Dead" or LIVING DEATH’s "Vengeance Of Hell" albums back in 1984, it was the vocals on both of them that caught your attention almost immediately – and not so positive, right? But then eventually you sort of got used to them too; correct? BLOOD OF KINGS sound fine – even with those very distinctive, nasally sung vocal parts, and I am sure their somewhat unpolished, 80s orientated Heavy and Speed Metal will please many of you. BLOOD OF KINGS: www.facebook.com/bloodofkingsmetal, label: www.mygraveyardproductions.com