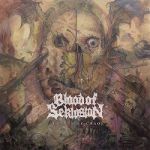 Italian horde BLOOD OF SEKLUSION are meanwhile active now since ten years and what is better to celebrate the first decade band history than a second full-length album. Surprisingly the band sounds like they have been founded in Sweden back in the early 90s. Somewhere between ENTOMBED during their era between “Clandestine” and “Wolverine Blues” and GRAVE during their “Soulless” era, the guys from Modena found their own style, which obviously pays homage to the style of the mentioned bands. Surprisingly the album sounds very fresh and is not a simple copy. The band understands to use their influences and put all those trademarks together to a very enjoyable album. If Nicke, Alex and Uffe will ever record new material together, they couldn’t do it any better. The HM-2 tuned guitars are heavy as f**k and cover all trademarks from slow, nearly doomed sound to fast and slashing, sometimes nearly crusting Death Metal. Starting slowly and a bit careful with the opening track ‘The Desert Of Lost Souls’, the band increases the level of hardness and speed from song to song and prove that they will be definitely playing a role in the future Death Metal underground in Europe. Worth to mention is also the good drum work, which is fast and powerful and combined with the solid bass-lines and the deep growls of Alberto their hellish cocktail is rounded off. Don’t waste time and check the band out via the following sources: www.facebook.com/bloodofseklusion, www.fda-records.de