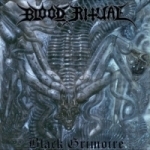 Satanic US Death Metal horde BLOOD RITUAL is back! By releasing their second full-length in their around 13 years long career after letting the fans of the debut "At The Mountains Of Madness" (Moribund, 1994) wait a whole decade the big question is how "Black Grimoire" can continue where the debut left off and overcome the weak production of the debut without sounding like a totally different band? The latter is, of course, easy to answer, just enter Autopsy Room Studio and apply a heavy, transparent yet not too polished production and you have arrived in the present tense sound-wise without losing the old school charm. Musically BLOOD RITUAL was always high class, and "At The Mountains Of Madness" was an album that was excessively brutal, dark, occult and performed with exceptionally skilled musicianship. Though BLOOD RITUAL consists only of two members these days, namely Tim Bishop (guitar, bass, vocals) and session drummer Neil Wong, the musical qualities they represented as an quartet on the debut haven’t suffered, not at all, they have actually only improved. Whereas the debut was primarily harsh and violent "Black Grimoire" now offers a wider spectrum of musical elements, is pretty melodic at times, especially during the countless leads, then the brutality conquers again and everything is united by the same unholy atmosphere and the same vocal style. Due to the better production and stronger tempo variation "Black Grimoire" appears more impressive, more epic than its predecessor and embedding some DISSECTION – like riffs (e.g. in ‘Ritual Of Lust’) into their otherwise heavily MORBID ANGEL – inspired sound only adds to the sinister atmosphere and dramatic tension. The interplay between aggression and atmosphere works extraordinarily well on "Black Grimoire" and though it might need some time to grow on you, at least I had that experience, this album offers a highly fascinating, diverse and intense version of Death Metal that stands out of the masses of standard blast orgies as an inspired and moody satanic piece of music. Along with INFERNAL LEGION (on the same label) one of my personal most positive surprises in the Death Metal field lately, Horns Up!!! www.moribundcult.com