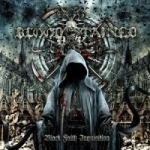 BLOOD STAINED DUSK is one of the new contenders of the US Black Metal scene that really deserves a lot of attention because they are actually making an impact. This is the follow up to 2004’s “Continuance Of Evil” and damn, it is a worthy follow up indeed! Long gone are the early EMPEROR comparisons that plagued their early releases. One can say there is still a slight trace of that nordic epic vibe often heard in their early releases but they have managed to adapt it to the new stuff and make it their own. The vocals are the best I’ve ever heard in ages courtesy of a new member among them who goes under the name of Pest (Obtained Enslavement, ex-Gorgoroth, Octagon (US)). The difference between this band and the rest of the pretenders are big amount of musicanship wisely manipulated to craft what could be the best Satanist art ever spawned in the US since ABSU. www.moribundcult.com, www.myspace.com/bloodstaineddusk