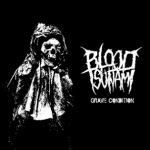 "Grave Condition" is the fourth full length album recorded by the Norwegian band BLOOD TSUNAMI. It will be released on April 27, 2018 by the Dutch label Soulseller Records. It follows the wake of their previous releases, especially the 2013 album "For Faen!". But, getting to the point, how does this new effort by BLOOD TSUNAMI sound? It’s basically a mixture of rabid Thrash Metal and Hardcore / Punk with some pretty boring melodic parts. Nowadays there are tons of new bands getting obsessed with trying to replicate what the big and cult names did during the 80s. DEATHHAMMER, TOXIC HOLOCAUST, WITCHTRAP etc are just some of the acts leading this old school Thrash and Speed Metal revival in terms of riffs, production, imagery and musical approach. Ok, BLOOD TSUNAMI does something similar, but instead of looking for a dirty 80s sound like GEHENNAH for example, they opt for a solid and professional modern production. Take the DESTRUCTION guitar style, add a bit of EXODUS, the SLAYER’s fastest songs from "Divine Intervention" and the tribute album "Undisputed Attitude", mix everything with vocals that incarnate both harsh screaming in the vein of AURA NOIR and hoarse barking à la DISCHARGE and ANTI CIMEX, plus some growlings here and there: then you’ll get "Grave Condition". Less than half an hour of angry, catchy and a bit repetitive Thrash Metal, influenced by the UK 82 Hardcore sound (good point) and in some parts by the Swedish Melodic Death Metal (bad point). The riffing is fast and punkish on a side and a bit melodic on the other, sometimes there’s a Scandinavian feel and sometimes a rawer one, whereas the solos are very enojayable. Behind the kit there’s Bard Faust, mostly known for having played with early EMPEROR and for having been convicted of murder. He does a good job: tons of D-Beat grooves and some more dynamic parts, nothing spectacular, but a decent and galloping drumming. A final comment on the cover artwork: it’s a black and white image of a corpse and I’m pretty sure that is one of the Knights Templar from the Spanish horror saga "Blind Dead" directed by Amando De Ossorio. This kind of black and white front covers is very reminiscent of the ones used in the Crust and D-Beat subgenres. Yes, BLOOD TSUNAMI play Thrash Metal, but are strongly influenced by Punk and violent Hardcore both musically and visually. If your ears are into the same genres, get their new album here: www.soulsellerrecords.com. More band info you will find at www.facebook.com/bloodtsunamiofficial