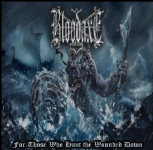 BLOODAXE
For Those Who Hunt The Wounded Down
(Northern Force Records)
35:14min

Back in the days, many many years ago (almost too many, as the thoughts of back then, makes me feel a tad old), I received a CD and handwritten letter from Canada, from a viking-warrior and band I didn’t know. This was back in 2001. The man called himself Nordavinden Lien, a Canadian with Norwegian roots, the band was BLOODAXE and the album "Bloodthrone", the debut full length from the band, a blazing attack of hateful and aggressive Black Metal inspired by the old valleys and mountains back in Norway. After a bit back and forth, the band released their second effort "Raping The Ancient" in 2004, yet a fist of aggression and wrath in the face of the unexpecting. Fast forward 9 years, even though we write 2014 now, "For Those Who Hunt The Wounded Down" was released last year. And it seems like the wrath nice and slowly has burned from the veins of Nordavinden. Don’t get me wrong, this is still quite aggressive and in your face, though in a very downtuned way, compared to the two first releases. This is the epic output of BLOODAXE, 35 minutes of slow and atmospheric Black Metal with a good dose of inspiration from BATHORY, VENOM and CELTIC FROST, midpaced, churning, doomy, epic and crushing. I have used quite a while to get comfortable with the slowly chanted and spoken vocal, compared to the rasping attack on the earlier albums, though eventually it made sense, together with the slow evolving crushing guitar riffs. My two favorite tracks on this release are the two epic attacks ‘Tears Of The Elders’ and ‘Seidr (Black Witch)’ well crafted and profound evolving music that latches on to the listener, or at least me. The greatly crafted, classic Rock’n’Roll guitarleads we get on this release are also good to hear in this connection, they add a nice classic and mature edge to the raw and furious output. A quite mature and calm release from BLOODAXE, compared to what we were come to expect, though still with an edge and message, that latches on, very effectively. I am quite positively surprised, after I’ve used a good amount of time to let the album sink in. More info beyond the witching hour: www.facebook.com/thetruebloodaxe, http://bloodaxemetal.wix.com/bloodaxe