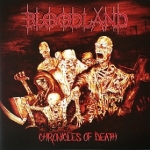 They say it is wise to try something new each day. Today I tried BLOODLAND, a band that I had never ever listened to before, but there was something about the tracklist that I decided to try it. Boy, was I surprised! And since I did not know the band, I had to do my homework after I listened to this album. Yes, after. Why? Because I like to listen first, to let the music speak for itself, and then I would look the band up. Anyways… “Chronicles Of Death” is a simple yet dynamic, straight-forward Death Metal album. Mid-paced songs building a climax of headbangeable rhythms and thrashy elements can be found in tracks such as ‘Waiting For Dissection’, ‘Out Of The Grave’ and, obviously, the title track ‘Chronicles Of Death’, not without certain traits and nuances of an old school style, while the furious rampage of double-bass drums and heavy riffs dwell in ‘Bonesaw’, ‘Murdered Is Expensive’, ‘The Undead Wrath’ and the cannibalesque ‘Ruitual’. Curiously enough, the highlights of this album might as well be the opening and closing tracks, ‘Buried Alive’ and ‘Bonesaw’, re-recorded, re-worked versions of songs previously included in "Buried Alive", the band’s demo, released in 2010. The thick production accomplished at PSI Studio by Patrick and Fields Iffiger (two names I will surely start to keep an eye on) suits the music perfectly well, perhaps because they have been working with BLOODLAND since the band’s first EP, released in 2013. Released in a limited edition of 500 copies by German label Unholy Fire Records, “Chronicles Of Death” is a well executed, great debut album for a band delivering the goods, and the tools of the trade are all over the album. If you are a devourer of Death Metal, this piece is for you. www.facebook.com/bloodland666, www.unholyfire-records.com