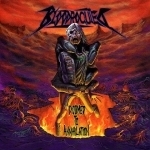 What the heck is going on in Belgium? Another Metal thrashing horde from our neighbours. They recently spoilt us with stuff like EVIL SHEPHERD, EVIL INVADERS or SANITY’S RAGE and now you can add this four piece from Eppegem to this list. "Doomed To Annihilation" is their debut album and offers you eight furious tracks of marvellous old school Thrash Metal mayhem. These youngsters are capable of writing some quite cool and interesting tunes. Even having all the basic ingredients which you expect from a young energetic, ass kicking outfit like that, BLOODROCUTED comes up a few times with some surprising elements. Those parts add, let me say, even more punch to their own compositions (e.g. the great melodic leads in ‘Violent Vortex’ or ‘War Chronicles’). They have a keen sense of how to change rhythms or using breaks to let the songs flow. Apart from all that varity and skill the horde always sticks to their basics which is nothing less than a passionate, very well executed brand of headbanging madness with the neccessary lethal dose of aggression and fury. The good vocals of Bob have a slight Crossover flair I think (somehow NUCLEAR ASSAULT flashes into my mind – maybe pure coincidence, who knows). The quality of the production turned out excellent. Their sound engineer Bert Vervoort really did a great job. An eyecatcher in my opinion is the superb, maybe a little bit cliche laden, cover artwork by Mario Lopez. But who fucking cares – it looks awesome, predestined to be released for a vinyl edition of the album. Speed / Thrash Maniacs can’t do anything wrong with this disc. The only negative thing is that the long player is quite short (what an irony) as it doesn’t even scratch the 28 minute mark. Just get in touch with the band at www.facebook.com/bloodrocutedthrash for ordering details, info or sound samples.