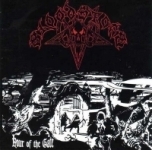 With this vinyl release Blood Harvest Records presents another act’s first time ever appearance on vinyl. Recorded and mixed in Studio Sunlight with the help of Tomas Skogsberg, Fred Estby and Anders Lindström you can be sure to get a pretty good sound, though I have to admit the sound of side 1995 sounds a little bit different to side 1994 as we are talking about 2 separate recordings. Vinyl junkies and fans of early Swedish Death Metal couldn’t care less as those who know the BLOODSTONE releases so far can be happy to get the demo "Hour Of The Gate" from 1995 (side 1995) and "Branded At The Threshold Of The Damned" from 1994 (side 1994) on vinyl and packed in a quite decent way. I can only feel great about Blood Harvest as they are presenting us one great release after another. BLOODSTONE is quite an unknown band as far as I can consider that and weren’t really that well known even back at their active days, but their music shows that this definitely wasn’t the bands fault. Perhaps they came just a little bit too late when the Death Metal boom of the early nineties was almost over and Black Metal turned to become the next big thing? What you can expect from BLOODSTONE’s music is Swedish Death Metal with slight similarities to MARDUK’s early work ("Those Of The Unlight" and especially "Dark Endless") which isn’t the worst deal, I’d say. It sounds in a way typical Swedish, which isn’t meant in a negative way especially not reading my last sentence comparing them a little bit with early MARDUK. It’s quality stuff here and another prove that Blood Harvest had the right choice in figuring out what should have been released already many many years before. Check out www.bloodharvest.se for ordering details!