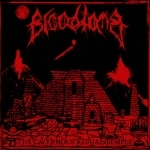 Nearly fallen from my chair during the first seconds of “The Cavernous Ritual Temple”. Obviously BLOODTOMB thought it is a good idea to start off with a deep guttural scream from the very depth of hell, supported by high speed drumming and aggressive guitar leads. So it was right clear from the beginning where the sonic journey is heading. A mean mixture of fierce Death Metal and War Metal. Although the band uses corpsepaint during live shows and lots of bones and suchlike gimmicks, from my point of view it is more Death Metal. Because the sheer aggression and blasting madness of other War Metal bands are missing. Instead the latest releases of DIABOLIC, PERDITION TEMPLE or KHNVM came to my mind. Sound wise there are cutbacks to mentioned bands, but the production is definitely above demo sound. Every instrument can be heard, that is in fact much better than the sound by some established War Metal outfits. The songwriting is rather simple and the technical skills are as well kept elementary. BLOODTOMB are hailing from the Netherlands and the band has been quite active in the underground. Two demos, a live tape and one EP since 2015. But somehow I never took notice of the band, which in conclusion means I am nothing but a mainstream wimp and poser who should better leave the hall… ok, just kidding. There are so many bands lurking out there, which leads us back to the question, if BLOODTOMB is worth a listen? Unquestionably, yes! All further band information can be found at www.facebook.com/bloodtomb and www.facebook.com/fallentemple666