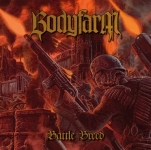 Dutch Death brigade BODYFARM earned their name in Death Metal over the last years pretty continuously. Two albums, “Malevolence” (from 2012) and “The Coming Scrouge” (2013) and a self-titled EP in 2010 made them a name known to those who listen to the Death side of Metal. And now “Battle Breed” is here, their third album, said to be the deciding point of “make it or break it”. But if BODYFARM will make it with this album, I’m not quite sure about. On the one hand, their way of Death Metal is really good. Sometimes spiced with Thrash Metal influences and melodic guitar solos, mainly very Dutch sounding and of course played by very good musicians. On the other hand, I miss the final kick on “Battle Breed”, the ultimate punch in the face that makes me scream for one more round. The opening song ‘The Dark Age’ really wetted my appetite, since it is really a sweeping and furious one with that surprising moment when the voice of guest vocalist Martin van Drunen sets in. But with the following ‘Saxon Victory’, the album starts to flatten a little bit until I found another interesting highlighting song in ‘Storming Revolution’ with some well integrated even a little modern sounding moments of Thrash. The grooving ‘Wolfpack’ with its fine tempered ASPHYX vibe is another real highlight here. And ‘Death By Fire’ at least made me smile at the DEICIDE tribute chorus. But that’s a little too few to really convince me. “Battle Breed” is by far not a bad album, since it will feed the needs of those addressed, it’s just one of those albums that might be buried by time and dust sooner or later. That’s quite a pity, since especially “The Coming Scrouge” had more to offer. And it had a better artwork of Juanjo Castellano as well, even though the one on “Battle Breed” is cool all the way. Check the band out at: www.bodyfarmdeathmetal.com or visit their label: www.cyclone-empire.com