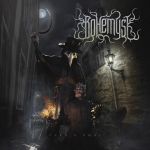 Even though “Čerň A Smrt” is the first album from the Czech BOHEMYST, this album is not a real debut release. This band was already around under the moniker AVENGER since 1992 and released six studio releases plus two compilations and a live album in twenty years before they changed their name in 2017. So, we have a new release from a band established in the underground, and that’s what you can clearly recognize listening to “Čerň A Smrt”. Since I haven’t heard any of the AVENGER releases yet, I can only refer to this new offering of BOHEMYST here. “Čerň A Smrt” ranges roughly between Black and Death Metal, but the songs are more in epic and doomy spheres and even have some moments that are a little bit inspired by classical music. Together with the variable vocals and the Czech lyrics this mix is quite unique and very thrilling in its best moments. On the other hand, some parts of the album sound a little bit too settled in my ears. But nevertheless songs like the opening title track, ‘Na Umrlčích Prknech’ or the great ‘Paní Lesa’ are fine songs. It’s especially the latter that really shows all the facets of the sound of BOHEMYST. ‘Kosti’ with its spooky, yet catchy keyboard riff even has the potential to become an ear worm. Yet my personal favourite on “Čerň A Smrt” is the doom laden, atmospheric cruncher ‘Nekromantika’, a real beauty! So, if you are out for music that’s Black, Doom and Death in one album, BOHEMYST and “Čerň A Smrt” should please you. For more info visit www.facebook.com/bohemyst or www.ochtenddauw.com