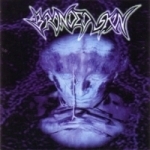 I saw these guys play live with DESPONDENCY and GOREZONE recently and was quite impressed by their old school Death Metal and their stage presence. This CD is already a little bit dated as the band is planning to enter the studio in 2003 as far as I remember – BRANDED SKIN already played a couple of new tracks live. The demo is well produced, so nothing stands between the BOLT THROWER influenced songs and me. What I like a lot about BRANDED SKIN is the vocal department. Singer Alexander sounds deep the old way with a good amount of aggression. No lame frognoise on here. Guitarist Dirk adds some Black Metal style backing vocals so nobody gets bored. Bored??? No way, the compositions are miles away from monotony, every song breathes its own evil spirit. Don’t get me wrong – this CD isn’t perfect as there are moments where one might think: “they could have done it a little different here or there” but on the other hand this leaves space for improvements, right? Secondly, this recording doesn’t bring across the power of BRANDED SKIN live, so let’s wait for the upcoming release. Headbangers order a pressed CD for 9,- € (incl. p+p) – at least within the German borders and the band offers Shirts for 10,- € as well. www.brandedskin.de