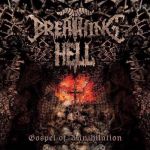 BREATHING HELL was formed by a number of individuals from several nationalities and with prominent bands in their curricula. This is the debut CD and, so far, only release, featuring three quarters of an hour of Black / Death Metal, much elaborate and well-played, with no sacrifice to aggressiveness. If you are into fast and heavy music with technical prowess and great production, this is sure to be your thing. Truth is, despite the brute onslaught, there is quite a bit of tempo change and more melody than might be expected, not only in the very technical solos but also in the general structure of the songs. This contrast is often like a marriage between heaven and hell, although it does sound cohesive and never eccentric or losing the way. There is even space for some Black’n’Roll in ‘Hellraising Degenerates’. Formed by vocalist Serberuz Hammerfrost of Singaporean DRACONIS INFERNUM and guitarist Triumphator of Polish INFERNAL WAR, we also have Daray of VESANIA on drums, and that should give you an idea as to what to expect in this department. This is not exactly a hyperspeed band so he seldom has to push himself as much as when he was playing, say, the stuff in VADER’s "Impressions In Blood". Still, his ability obviously shines. The lead guitars are handled wonderfully by Ghiulz Borroni, who much impressed me when I saw him on stage with BULLDOZER some time ago. As for the songs, after a horror movie like piano intro, you are chuck into the satanic storm. From then on everything is consistently top notch from beginning to end. It’s hard to point highlights, although if I were hard pressed I might mention the crushing ‘Incinerate’. But it’s all very good. If you are into stuff like BELPHEGOR, DARK FUNERAL and so on, give this a spin with no hesitation. More information at: www.facebook.com/breathinghellofficial, www.actofsinrecords.eu