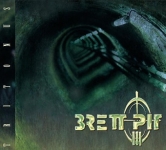 BRETT PIT is an experimental Metal band from Germany that in spite of being in existence ever since the now somewhat distant year 1997 has one sole release to their name, the 2001 CD called "Tritonus" that I am here reviewing. The name of the album certainly refers to the devil’s interval in music, the tri-tone dissonance that was historically avoided. So with this reference in mind I started listening to this, and even though my musical theory knowledge is so reduced that I wouldn’t really recognize a tritone if it hit me on the face, it all sure sounded much dissonant to me. Very slow at times, far too groovy and hardcorish to my taste, and with the kind of experimentation that might work if done by VOIVOD (but that even by them wouldn’t be much to my taste) or a bit like MESHUGGAH at times. There are samplers, unexpected tempo changes, and it all sounds too much like an attempt to be original regardless of anything else. Also, the parts that are more recognizably Metal (many are not!) are far too much PANTERA groove-like for me. And then suddenly it all goes somewhere else, into the realms of craziness, and I don’t really mean this in a good way. In the same song you can have doomy stuff, thrashier stuff, slow minimalistic Rock stuff or whatever, and very often just plain what-the-fuck stuff. Listen to, say, ‘Twopoint’, or just any other song, really. They were probably aiming for the mind-boggling, but to me they sound like some musicians having fun on the sole premise of leading you to the musically unanticipated. Original? Sure, I guess a bit… but disjointed, often boring, and quickly worn out. That long final track will certainly be more appealing to a fan of depressive Gothic Rock or whatever than to any true Metalhead. It wasn’t easy to get through I tell you. If you want to visit a realm of musical insanity, try this.