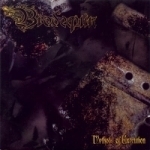 After dumping the original mix of the album, which failed to meet the requirements of the US Death / Grinders, “Methods Of Execution” was delayed, overworked and finally sounds as it should… Crispy, raw, brutal as fuck!!! Though “Instruments Of Torture” in my opinion still remains unrivalled BRODEQUIN’s newest rape of your auditory canal marks a huge improvement compared with the utter disappointing “Festival Of Death” album and offers a delicious guttural ultra-blast orgy! Of course the monotony one often has to face when it comes down to such almost entirely fast albums is a point worth of criticism, but hey, who expects something diversified by BRODEQUIN?!? With a bigger amount of “slower” parts the debut certainly is somewhat more varied, but if you are into total merciless brutality this might be the best buy of the month. The guitars shred, the drums hack and the vocals are as low and sick as ever. With their interesting lyrics about medieval techniques of torture and the likes BRODEQUIN positively differ from most other Death / Grind bands and have something like a concept to offer, what definitely deserves appreciation. “Methods Of Execution” is a skilfully executed hypnotic and insane rush of violence, which should leave any fan of the band in a state of ecstasy. As a little bonus the CD includes the video to the album’s opener ‘Slave To The Pyre’, which you can also check out at www.unmatchedbrutality.com. Band infos here: www.brodequin.com