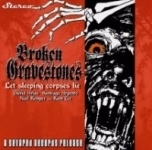 I can say that I like the movies "28 Days Later" and "28 Weeks Later" a lot, but one thing I totally dislike about them: the zombies run, and they run fast, very fast. And that’s bullshit, Zombies don’t run! And here I’m with BROKEN GRAVESTONES and their 3rd song (the 4th if you count the intro ‘Sounds From The Manchester’s Morgue’) ‘Zombies Don’t Run’ on their marvelous MCD "Let Sleeping Corpses Lie". The band and me like the zombies the way Fulci, Romero, D’Amato and more presented them in their movies and not like they are shown in some of the modern and more mainstream productions of today. That’s old fashioned, that’s traditional and the same goes for their brand of Death Metal. Heavy and massive riffs, slow to midtempo drums, pounding bass and above all this old school MASSACRE (with hints of WINTER, CELTIC FROST, AUTOPSY at their "Mental Funeral" days, old DEATH…) you have the incredible, outstanding and bonecrushing voice of Mr. Kam Lee. Basically this is another one of those projects with Kam Lee on vocals, and generally I think BROKEN GRAVESTONES is just a project at all, as Noel Kemper, the main man behind this band is involved in other bands, too (which I don’t know one single band of, to be honest…). The 3 songs featured here (‘Let Sleeping Corpses Lie’, ‘The Rising Dead’ and ‘Zombies Don’t Run’) and the above mentioned intro are the best example of how old school Death Metal should be played and a prove that heavy music is not necessarily fast, filled with blastbeats, breaks each 5th second or hundreds of riffs in one song. Fans of Kam Lee will love this MCD without doubt, as this one is his style of music and the others who want to hear Death Metal outside of any trends make everything right in supporting this impressive first sign of life from BROKEN GRAVESTONES. Additional note: next to the mentioned 3 songs you get the 2 songs ‘The Rising Dead’ and ‘Zombies Don’t Run’ in demo versions. Not essential but a nice add-on. Full support to this cool project therefore go and check out www.comatosemusic.com for ordering details.