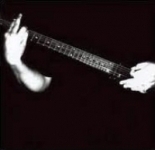 As with the majority of bands these days who decide to travail in the realms of Gothic / Doom inspired Black Metal, here’s yet another attempt for you all who follow these manic depressives. This time from an Austin, Texas three piece, who try to cross that dark spans of the event horizon into other worlds to escape the cold harsh reality of the present day. Similar musically and vocally in many respects to VULPECULA, side project of Chuck Keller / ARES KINGDOM, for those of you out there that are into this type of atmospheric / Space Rock type of Doom with little doubt you’ll be pleased by the primitive raw nature of this Texan beast. Five brand new tracks on this MCD are featured, a quick follow up to "Call Down The Starcult ", an all instrumental CDR put out by the band earlier this year on their own. And the successor to the band’s debut demo also released earlier in the year entitled "Squamous". The band’s moniker is an ode to H.P. Lovecraft from a character of one of his short stories, BROWN JENKIN, a malevolent half-rat half-human figure. Odd choice for a band name I agree (and even weirder the enlarged flea that seems to be the band’s mysterious calling card / focal point of cover art for each of their releases) yet if for nothing else the creators of this group at least get an A for effort in terms of originality with this aspect of the band’s name. However aside from this the ineffectual duality of BROWN JENKINS is that at the same breath that this originality is stated about the band’s origins, without question I keep thinking about VULPECULA while this CD spins and that’s not a good thing. As more than a few of these riffs and ideas seem to have been heard before and replicated better. Contact: www.777starshine.com or www.myspace.com/brownjenkinsband or www.moribundcult.com