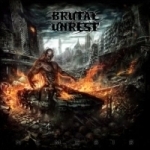 Germany has been known for some big names in the Thrash Metal Scene. But when it comes to Death Metal bands, there aren’t that many that come to mind. Being the oblivious Metal fan that I am, can think of BLOOD, ATROCITY, WEAK ASIDE, MORGOTH and maybe a few others (it seems you missed out on some of the best German Death Metal bands yet, Al… so, make sure to check out at least VENENUM, SULPHUR AEON, ERODED or HATESPAWN to get an idea what goes on overhere lately – Frank). And from now on, I will add BRUTAL UNREST to that list. They released a demo tape in 2006 and their debut album "Hellcatraz", in 2009. For 2012, they come with their sophomore album, "Nemesis" via Aural Attack Records. First off I noticed the killer artwork and then their song titles, which evoke a certain dark atmosphere, even though I think their band name is not that "evil", dare I say. I was expecting another "NWOSDM" clone band; those that saturate the international scene today. Luckily, these Germans know their Metal and they honor the "brutal" in their band moniker. Production is great. One can’t deny the modern sound, but "Nemesis" is perfectly balanced and raw as hell. Beefy guitar / bass tone and a good drum sound, just a little too triggered for my taste. Execution wise, the guitars / bass deliver sharp riff after sharp riff and the drumming is excellent! Tommy’s growls are great, but he could use some variation since I feel his vocal performance is a tad one dimensional. But that’s about it. Everything else is a relentless attack of good old Death Metal, mixing in blast beats and a nice overall groove. Just like the middle part of the great opener, ‘Heretic Revenge’, where headbanging is undeniable. And worry not, since most of the songs keep things interesting enough. I also liked the fact that there are 3 instrumentals, intro, middle and outro, that provide a much needed break in between the aural insanity. So there you go. Another quality German band that deserves respect and support! BRUTAL UNREST are definitely a name to look out for! Go here for more info on the band: www.brutalunrest.de