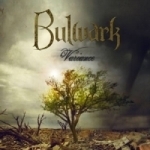 BULWARK may not earn your vote for best album of the year, but upon listening to their album, “Variance” you may at least award them a certificate of eccletic writing. The album begins with a Middle Eastern melody – so Middle Eastern in fact, it would sound out-of-place on a NILE record. Perhaps NILE has conditioned listeners to expect savage Death Metal riffs after a Middle Eastern introduction, and if that is so, then BULWARK is obviously combating this standard enforced by NILE. Unfortunately for BULWARK, their argument is weak. Nothing disappoints like an album whose only strength is the introduction, although the band does have some interesting melodies and riff patterns. The album, on the whole, is lighter than the average Doom record, edging beyond even proto-Doom like CIRITH UNGOL, and into plain old Rock and Roll. For what it is, it’s decent enough. For what it is not (a Doom record) this is not the best way to spend your time. www.bulwark.ch, www.myspace.com/bulwarkch