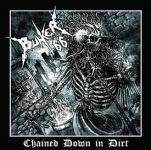 BUNKER 66 are three hellraisers from Italy that play a kind of dirty Black / Thrash with a lot of Heavy Metal and Rock. Having seen them play live in France some months ago I knew what the band’s stance on Metal is, and that this is a trio of great stage Thrashers with very competent musicianship and a lot of attitude. Vocalist Damien Thorne playing his bass and snarling with his Steve Harris striped spandex trousers is a sight to remember, and both guitarist J. J. Priestkiller and drummer Dee Dee Altar sure can play too! Truth is, any band that has the nerve to open an album with a CELTIC FROST cover (clearly one of their biggest influences) as they previously did, and on top of that the much bigger nerve to choose it from "Cold Lake", has balls enough to grasp my attention, and so I was looking forward to this new album. And from the beginning we are delivered what this band is all about. Blackened Speed Metal, with Thorne alternating his reverb-ridden thrashy rasp with surprisingly melodic Heavy Metal singing. The production is very good, and adequate; it may sound primitive but it totally suits the songs, which are heavy and very well played. I enjoy the contrast between the general brutality and Priestkiller’s slick, classy leads. There’s always a kind of amateurish touch to the sound that’s surely a deliberate choice. BUNKER 66 bleed 80s Metal and sound very legitimate and devoid of any contrivance. And they are old enough to remember and miss the old pristine age. Verily, the vocals’ recurring flirt with higher pitched actual singing sound like a homage to those old times. In fact, the whole of their music is such a homage, and in this they remind me of bands such as DEATHHAMMER, BÜTCHER or the Dutch CHAINSAW. I could try to name a couple of favourite tracks, such as ‘Black Steel Fever’ or the neckbruiser ‘Power Of The Black Torch’, but in fact the whole album is consistently great, although these 8 songs are short and therefore this full-length is a bit far from the conventional half-hour minimum. I was expecting more songs when it ended… because I was enjoying it so much! Hellishly recommended! Get more info on "Chained Down In Dirt" from www.facebook.com/bunker66, www.hrrecords.de