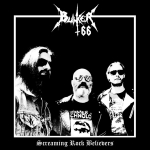 No misspelling, the band is actually named BUNKER 66. Of course everyone has the number of the beast in mind, but the trio from Italy decided to leave it that way. I have no idea what the band name points to, but that question may be totally dispensable, even for the band. Founded back in 2007 they released their first sign of life, an EP called "Out Of The Bunker". Well, that is a fitting name. Second assault was a live album, the "Live & Melting" EP. I am not really sure if this output can be considered as an EP or live album (playing time: 23:26min), but I guess, like the band’s name, it is not really a point of interest. Next in line was a 12" split release with fellow countrymen BARBARIAN. The debut studio album was spawned in the year 2012 under the name "Infernö Interceptörs". The röck döts or Heavy Metal Umlaut are still quite famous. Maybe because they sound kind of grotesque. Most bands using this way of spelling tend more into a raw, dirty, unpolished and rotten version of Metal respectively Hard Rock. So do BUNKER 66, "Screaming Rock Believers" is a quite fitting self-description. Early VENOM, MOTÖRHEAD, the slower parts are kind of reminiscence to HELLHAMMER. Quite interestingly the album opens with a cover version of a CELTIC FROST song. But not from the early years, instead the band picked ‘Seduce Me Tonight’ from the (in)famous "Cold Lake" album. Rather an unusual and daring choice. But it works within the context of the whole release. The sound could have been a bit more clearer and forceful. And the vocals sound, at least to me, too much squeezed and pressed. BUNKER 66 are trying to add more variety by using sing-along background choirs, but the vocals remain the weak spot. But nevertheless, if you like the genre of Black / Thrash Metal influenced Rock’n’Roll (or vice versa), check this out! For all vinyl freaks: limited to 500 copies; 300 x white / black splatter + 200 x black vinyl, 425gsm heavy cardboard cover, lyric sheet. www.facebook.com/bunker66, www.hrrecords.de

BUNKER 66 - Chained Down In Dirt - by Ricardo Campos