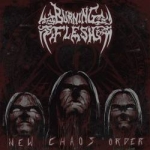 BURNING FLESH is a 5-piece Death Metal unit that was formed in 2005 by some Swiss and French fellows who seemed to share a common interest: playing Death Metal. BURNING FLESH self-released their debut album "Unconscious Deformity" in 2007, opening a few important doors for themselves by this album. In 2013 it was the right time for the band’s follow-up album titled "New Chaos Order", in which the band also returns with a new line-up. Musically, we talk about somewhat technical Death Metal here that could be some sort of a crossbreed of such names as DEICIDE, CANNIBAL CORPSE, NECROPHAGIST, SCENT OF FLESH and slightly even DEATH. BURNING FLESH clearly have the main stress on American sounding Death Metal that sounds both modern and old school, technical and in-yer-face – and all this makes a relatively pleasing sounding combination in my books at least. One can hear basically from everything the BURNING FLESH camp has done somewhat their best to avoid sounding half-assed a bit but more like giving them a chance to be considered one of those ‘new’ potential names in the Death Metal circles. BURNING FLESH have got some instant ‘push the like button’ to them, and why not. Their sound is pretty diverse and multi-layered even, and undoubtedly this type of stuff is meant to reach some extra pairs of ears amongst the Death Metal community for sure. Pretty darn good stuff on "New Chaos Order" indeed. More about these brutal and technical Deathsters can be found at: www.burning-flesh.com, label: www.greatdanerecs.com