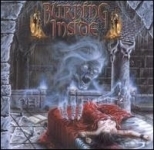 I have mixed feelings towards this album because it is such a departure from the style the band originally played that I was caught a little off balance by the material on offer here. Maybe you remember that the BURNING INSIDE first offering, entitled “The Eve Of The Entities”, was about techno Death, a kind of more extreme ATHEIST music, with a lot of technical prowess on display. On “Apparition” this aspect is considerably toned down in favor of a more straight forward approach. Let’s say the majority of the songs are somewhat one dimensional, basically they are Death Metal with Heavy Metal arrangement inserted. I don’t know if Richard Christy’s stint in ICED EARTH have something to do with that, but I found overtones of this Florida Power Metal band here and there. The best song of the album is to me the first one (‘Therapy’), it has a strong POSSESSED / DEICIDE flavor with melodic solos laid down in the middle section. The concern of the band for offering Death Metal with a difference is commendable, but maybe they should work a little more on their song structures in the future as the excitement factor is missing on some of the tracks. I noted that the band members are fans of MERCYFUL FATE / KING DIAMOND (even the good coverart remind us just that), and maybe they should explore this way further in order to come out with better structured songs next time. Don’t think “Apparition” is a bad album, quite the contrary I must say, it encloses enough talent and surprises to satisfy even the most demanding of the listener. Movie maniacs in particular should be delighted by references to horror films (the tracks ‘The Fog’ and ‘The Gates Of Hell’, or the two keyboards songs Christy has written and performed sound like tiny film scores John Carpenter himself could have composed). Richard Christy is famous for his phenomenal drumming technique, but unfortunately it is not before the fifth song you could hear the man in the full plenitude of his talent. “Apparition” is without doubt a strong album but not as potent and special as “The Eve Of The Entities” is. Even the production does not justice to the songs, as the sound is this time somewhat blurred and fuzzy, a shame when you consider the classic crystal clear production giving lot of room for each of the instruments in the first offering. To sum it up: interesting but not the masterpiece I know BURNING INSIDE are able to deliver.

BURNING INSIDE - by Frank Stöver