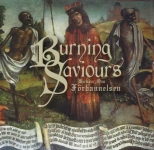 It seems to me that there are still tons of bands out there who dedicate their sound to the music of the past. Especially the sound of the early 1970s seems to be en vogue right now. BURNING SAVIOURS from Örebro in Sweden are a quartet that fit to this trend pretty well. But I have to defend the honour of the band here, since they are around for more than ten years now and have already released three albums from 2005 to 2007. After being on hiatus some years ago, they are back with a more or less new full length. More or less? Well, “Boken Om Förbannelsen” (“The Book Of The Curse”) is “only” a compilation of four 7”es released between 2011 and 2013, that had a musical, optical and lyrical context. The music here is pretty analog, which is quite refreshing. But on the other hand, BURNING SAVIOURS have nothing to offer which wasn’t already there. OK, the same goes for most bands in today’s Death Metal as well. But most of those Retro Rock bands sound pretty boring and lack the freshness a lot of the original old Rock albums still have. BURNING SAVIOURS added a lot of very old Doom Metal, especially PENTAGRAM and BLACK SABBATH, to their music, which makes “Boken Om Förbannelsen” a lot more interesting for me. The SABBATH influences are catchable best in the opening ‘Förbannelsen’ and ‘ I Am Lucifer’ – hence the familiar sounding riffing in the intro. With the quite spiritual sounding ‘The Offering’, BURNING SAVIOURS are experimenting with a pretty interesting xylophone. On the other hand we have songs like ‘Doomus Maximus’ or ‘The Nightmare’, that are the very old school of Rock. So, if you’re still not fed up with Retro Rock, give BURNING SAVIOURS a chance at: www.facebook.com/burningsaviours, or: www.ihate.se