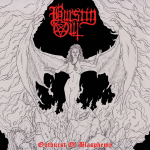 So, you’re missing early VENOM? You know, this one from "Black Metal" or "Welcome To Hell"? Good. Then buy this album as actually you will find here more of the old and classic VENOM, than on the current VENOM releases. These Germans recorded 10 songs (guess what, of course they couldn’t refuse and they recorded a cover version of VENOM’s ‘Burstin’ Out’) and squeezed them into around 32:00 minutes, so forget about epic or long songs: "Outburst Of Blasphemy" is like a punch in the face, it’s straight, fast and dirty. It’s quite interesting, as BURSTIN OUT is a brand new band, they started to play in 2012, the same year they did a demo titled "A Tribute To VENOM", incl. 8 VENOM songs (!!!), but probably it wasn’t enough for them to be known as a VENOM cover band, and so they did their debut EP one year later, and now we receive the debut album. For Satan’s sake, aren’t we all waiting to hear something like that on the new VENOM album?! Hell yes! Many Metalheads still dream about the Mantas / Cronos / Abaddon reunion and a classic sounding album, but most probably it will never happen. Instead of this we can listen to BURSTIN OUT, and the truth is they do an incredibly good job. If you want to get this piece of hellish Metal then better hurry up, as the LP is limited to 500 copies. More information: www.facebook.com/burstinoutofficial and www.heavy-forces-records.de