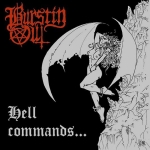 ‘In the midnight hour, when the moon shines bright, from the witches’ coven we raise from hell to fight’, that’s how the titletrack starts off, together with a hellish and catchy guitar riff straight from the good old days of NWOBHM, and just as dirty as when the darker and occult oriented bands started to stir up the scene with their satanic scenarios. This isn’t a band from back then though, nor some of the old pieces of beaten meat from back then, that have gathered in a new entity to spew forth some raw thrashy darkened Speed Metal with a good deal of rawness, no the band is made out of four rather young Germans by the names of Impaler, Satanscythe, Witchnailer and Menace and a common interest in energetic and intense Metal with a punkish Black Metal touch and the mighty VENOM. The band started out with recording a demo consisting of 8 VENOM covers, which lead them to a deal with fellow German label Heavy Forces Records, which lead to the release of this 12" EP limited to 500 pieces, and earlier this year, we saw the release of the band’s first full length which is reviewed here. The four original tunes and the cover of VENOM’s ‘Witching Hour’ are delivered with passion and intensity, one gets caught in the mosh right away, and the body rocks along the music, always a very good sign. There isn’t much originality about this, but damn it’s well made and delivered as thought, and the gods of Newcastle would without a doubt welcome BURSTIN OUT to hell and let them join the ranks for the war with satan in the name of Black Metal. A blackened thrashy and speedy update of the old VENOM sound and effort, done in the right manner and straight out without much more than effective and memorable riffing, pounding rhythm patterns, a punishing bass and a raw and wicked vocal effort that rips, a very well done and intense EP that I’ve enjoyed quite a lot, now I just need a way to figure out how to get my hands on the demo tape. More info on the speed hounds from hell right here: www.facebook.com/burstinoutofficial, www.heavy-forces-records.de

BURSTIN OUT - Outburst Of Blasphemy - by Bart Gabriel